Dr. Starzl, who was only 6 years old when his paternal grandfather died, remembered little more about him (Fig. 1) than the obese elderly man’s thick German accent.  He later became aware that his grandfather had been unjustly tried for the crime of treason during the First World War (Fig. 2) under an Alien and Sedition Act that subsequently was determined to be unconstitutional.  Although the verdict was acquittal, Dr. Starzl believes that his grandfather was permanently scarred by the experience.  Perceived dishonor also could help explain why Francis J. Starzel, the brother of Dr. Starzl’s father (Fig. 3), legally added an “e” to his surname.

Dr. Starzl never knew his grandfather’s origin other than the claim that he had come from Austria (part of the 19th century Austro-Hungarian empire).  In 2005, Dr. Starzl asked for help from Hans J. Bohmig, the long-standing Surgical Director of Amstetten Hospital in Linz, Austria (Fig. 4).  Professor Bohmig had collaborated with Dr. Starzl during 1969-70 in liver transplant-related research on blood coagulation at the University of Colorado, Denver (Link to Hans J. Bohmig).  Back home in 1972, he performed the first liver transplantation in Austria (also one of the first in Europe).   Now a third of a century later, Dr. Bohmig embarked on what turned out to be a seven-year odyssey that culminated in a masterful report dated October 22, 2012, entitled, “The Long Search for the Bohemian Ancestors of John V. Starzl”.

The Long Search for the Bohemian Ancestors of John V. Starzl

See: Supplemental Document - The Long Search for the Bohemian Ancestors of John V. Starzl Online or download the pdf

Please note that the figures referred to in this section are listed at the end of the Supplemental Document, starting on page 22. (They are not found in the sidebar to the right.)

The Immigrant Starzls in America

Professor Bohmig’s study established that John V. Starzl was the first child of Joseph Starzl (1833-1907) and Magdalena (nee Ruba) Starzl (1840-1889) and that these great-grandparents of Dr. Starzl eventually produced 7 more offspring (4 boys and 3 girls).  Only the last 2 (both boys) were born in America.  After arriving in the United States in 1878, Joseph and Magdalena (Lena) and their first 6 children travelled (probably by train) to Merrill, Iowa, a small settlement (not yet a town) located about 6 miles from LeMars.  LeMars became Dr. Starzl’s birthplace 40 years later.  Merrill and LeMars are located in an area known as Siouxland that includes fragments of Iowa, Nebraska, South Dakota, and Minnesota (Fig. 5).  Sioux City, Iowa, has been Siouxland’s cultural and commercial center since 1855.

According to Professor Bohmig’s study, the immigrant family did not arrive poor.  After purchasing a farm near Merrill from a Mr. Draper, Joseph and Magdalena (Lena) Starzl had their last 2 children (Nicholas and Barthol).  After his wife’s death in 1889 (age 49 years), Joseph farmed for several years and then built a home in Merrill which he shared with his second child (Mary) and her husband (Joseph Elskamp) until his death in 1907 (Fig. 6).  All  3 daughters (Katherine, Mary, and Magdalena) married local citizens and remained in the Merrill-LeMars vicinity.  After sale of the farm, 4 of Joseph’s 5 sons migrated to the adjacent states of Emerson, Nebraska and Carthage, South Dakota where they bought their own farms (Fig. 7).

These people had come from a hardy stock that had tilled the soil of Bohemia for more than 2 centuries, and now instinctively attached themselves to the earth of the “new world”.  Although the social and economic constraints of their old world no longer existed, procreation of Joseph and Lena’s other offspring and the succeeding generations resulted by the early 20th century in a Starzl distribution on farms in Siouxland remarkably similar to the cluster left behind in Bohemia.  As Starzl relatives drifted away, the epicenter of the LeMars-Merrill complex was the counterpart of Bischofteinitz in Bohemia near which Professor Bohmig had pinpointed the Starzl origin (Fig. 7).

John V. Starzl (Dr. Starzl’s grandfather) was the only child of Joseph Starzl who seemed fiercely determined to find a non-agricultural pathway.  After attending the parochial St. Joseph’s High School (now Gehlen) in LeMars and reaching the age of 21, he moved to Chicago in 1886.  During the next 11 years (Fig. 8), he graduated from the Illinois College of Pharmacy, established a drug store, sold it, married Margaret Theisen and moved back to LeMars, Iowa where he purchased a German language newspaper called “Der Herold”.  Der Herold was Anglicized and became the LeMars Globe Post after World War I.  The couple produced 4 children with the given names of Oswald (died after 10 days), Romanus Frederick (Dr. Thomas E. Starzl’s father) (Fig. 9), Francis Joseph (future general manager [CEO] of the Associated Press), and Adele.  Adele, an author-artist who married a lawyer, Bruce Bedell, had 2 boys and died at the age of 37.

The exact circumstances under which Rome Starzl met Anna Laura Fitzgerald are not known, but can be easily imagined.  Sioux City, Iowa, was a melting pot in which the immigrant German and Irish populations met, frequently fought, and just as frequently fell in love.  Perhaps, it was inevitable that their paths would cross in the shared Siouxland territory of Sioux City, Emerson, and Ponca, Nebraska (Figs. 5 and 7).

The Starzl Diaspora in America

At the time of his retirement, Dr. Starzl had long since lost track of John V. Starzl’s 7 siblings.  This information eventually was provided by Margaret Ellen Rolfes, the granddaughter of Magdalena, the 2nd of the 3 female children of Joseph and Magdalena Starzl.  Although Margaret Ellen Rolfes was Dr. Starzl’s second cousin, he previously had been unaware of her existence.  After graduating from Gehlen High School (LeMars), she obtained an LPN status as well as a BA degree in elementary education.  In 1962, she made her first profession of vows as a Benedictine Sister of Mother of God Monastery, now located in Watertown, South Dakota with the religious name of Sister Gertrude (Fig. 10).  Fifty years later, a jubilee celebration was held on July 20, 2012.  Presently, Sister Gertrude is serving her monastery by sharing her compassionate presence with senior lay members at Benet Place and also directing the oblates of the Benedictine Community of Watertown.

Throughout the years, Sister Gertrude had systematically accumulated clippings and other memorabilia of the marriages, deaths, and other events of John V. and all of the other 7 children of her great-grandparents, Joseph and Magdalena Starzl.  In January 2008, she shipped the collection to Dr. Starzl and on October 22, 2012, she sent further genealogic information that accounted for 4 American generations of descendants of the original immigrants and their 8 children (Fig. 10).  Although the surname was “given up” by married female descendants, “Starzl” can be found in the 2012 telephone directories of many United States cities from coast to coast.  Many if not most are thought to be blood relatives of Dr. Starzl.

Margaret Theisen was born in Schleisingerville, Wisconsin (renamed Slinger after World War I), married John V. Starzl in 1897 and moved to LeMars, Iowa.  Dr. Starzl remembered her in “The Puzzle People” as hostile to his mother, and as a spendthrift who suffered from senile dementia in her last years.  She was, in fact, a strikingly beautiful woman when she was young (Fig. 11).  Her genealogy was elucidated in a study by Harold Theisen and Marie Roth entitled, “Theisen:  A German Chronicle”.  The study accounts for the four German families who contributed to Margaret Theisen’s bloodline.  These 4 families independently migrated between 1847-52 from widely separated parts of Germany to the common destination of Slinger, Wisconsin (Fig. 12).  Slinger is located about 30 miles from Milwaukee.

Doctors in the Family Tree

Dr. Starzl’s grandmother, Margaret Theisen, was the daughter of Nickolaus Theisen and Ursula Kraus.  One of Margaret’s brothers, Peter Theisen, fathered Harold Theisen, a prominent Cleveland surgeon.  Peter also had a daughter named Anna who married Charles Roth.  Donald Roth, one of their children (born 1918), was a Milwaukee nephrologist who established one of the first kidney dialysis centers in the United States at the Milwaukee Veterans Administration Medical Center (VAMC).  Dr. Starzl learned that he and Dr. Roth were blood relatives (second cousins) when he visited the dialysis unit on March 16, 1965 during a lectureship at Marquette University Medical School.

The 4-family genealogic study entitled “Theisen:  A German Chronicle” was mailed to Dr. Starzl in 1991 by Dr. Harold Theisen, his second cousin of whose existence he had been unaware.  By this time, Dr. Theisen was 90 years old and Dr. Starzl was 65.

The Long Search for the Bohemian Ancestors of John V. Starzl

Please note: The figures referred in the document below start on page 22 and are not listed in the right sidebar.

Download The Long Search for the Bohemian Ancestors of John V. Starzl with the Addendum by Hans Joerg Boehmig as a PDF file

Download Theisen:  A German Chronicle as a PDF file 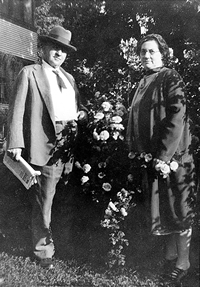 John and Margaret (nee Theisen) Starzl circa 1931 in the side yard of their relatively opulent LeMars home. By then, both had suffered onset of the diseases that soon would end their lives: kidney failure for John V (1932) and cerebral deterioration with Margaret (1937). 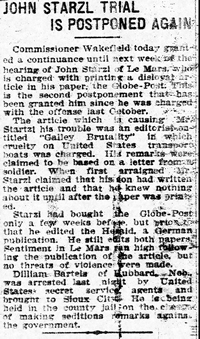 An article published on January 9, 1918, in the Sioux City Tribune about John Starzl’s trial under an “Alien and Sedition” Act. Ripples from this unlawful trial have continued on the internet to the present time 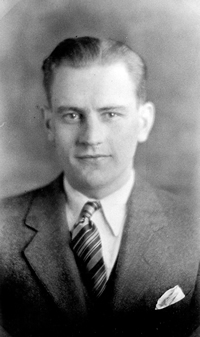 Dr. Starzl’s uncle, Francis Joseph Starzel. The “e” that was legally added to his surname was a source of disharmony with his brother Roman (Dr. Starzl’s father). 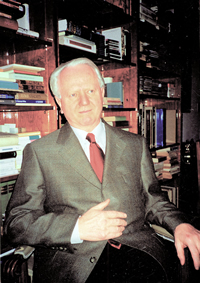 Hans J. Bohmig, one of Austria’s preeminent surgeons and principal investigator in “The Long Search for the Bohemian Ancestors of John V. Starzl” 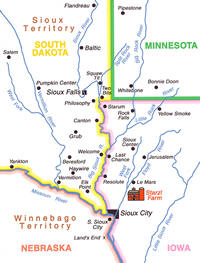 An early map of “Siouxland”, an area made up of pieces of Iowa, Nebraska, South Dakota, and Minnesota. In 1880, the population of LeMars was 1895, that of Sioux City was 7366, and Merrill (which did not yet officially exist) had only a few dozen inhabitants. 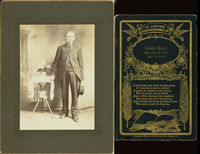 Formal photo of Joseph Starzl, Dr. Starzl’s great-grandfather (1833- 1907), not long before his death in Merrill, Iowa. 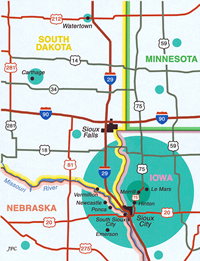 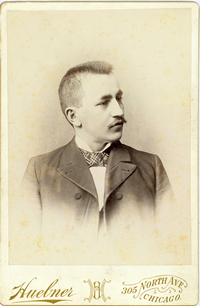 John V. Starzl, photographed in a Chicago studio at about the age of 25 (circa 1890). By then he had been in America for approximately a dozen years of which about 6 had been in a metropolitan environment. 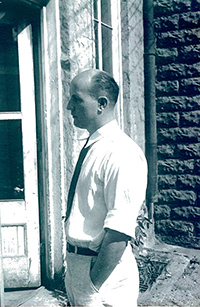 Roman Frederick Starzl, about 1935, in an unknown location 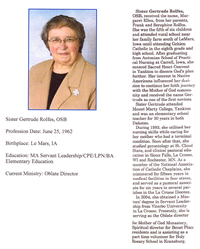 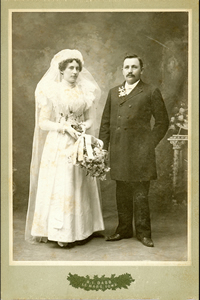 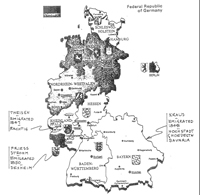 German sites of origin of 4 families that migrated to the United States during the first half of the 19th century and met for the first time in Slinger, Wisconsin.