In The Puzzle People, Dr. Starzl described how he met these Irish-born grandparents (Fig. 1) at their farm near Ponca, Nebraska and became acquainted with his mother’s 5 adult sisters.  The 6 girls were born in Nebraska in the following order:  Katherine 1894, Anna Laura 1896 (Dr. Starzl’s mother) (Fig. 2), Mary 1899, Caroline 1901, Lucy 1903, and Margaret 1905.  Three other girls died at birth.  The grandparents also had 5 boys, all of whom were stillborn or had died a short time later.  However, Dr. Starzl knew almost nothing about why, when, and from where in Ireland these grandparents had migrated.

The genealogic void was filled in 1990 by an investigation carried out by Leonard and Margaret McStay, the parents of a Dublin child who had undergone liver replacement by Dr. Starzl 6 years earlier in Pittsburgh; the child (Colin) now is an adult (January 2013).  Mr. and Mrs. McStay summarized their findings in a 15 page booklet that included photos of documents and places.  All of the evidence indicated that Thomas Fitzgerald and Katherine Mangan were married on April 16, 1891, in Clonbullogue, a small village (current population 500) located about 30 miles from Dublin.  (See: McStay Study)

The Genealogy in Ireland

Contemporaneous with the McStay findings, the Clonbullogue Fitzgerald family was independently studied by Maria Leech of Monasterevin, County Kildare.  Maria Leech is the great-granddaughter of a man named John Fitzgerald.  According to her genealogic map (Fig. 3), this John Fitzgerald (born 1842) and Dr. Starzl’s grandfather, Thomas Fitzgerald (born 1862), were the second and twelfth children of Thomas and Mary (nee Connor) Fitzgerald.  The other 10 children of Maria Leech’s great-great-grandparents were females.  The McStay investigation (See: McStay Study), Leech’s genealogic map, and her handwritten footnotes (Fig. 4) were in agreement on a key point.

All indicated that when Thomas Fitzgerald married Katherine Mangan and moved to America (Fig. 5), his older brother, John (1842-1920?) who had migrated to the United States in 1862 at the age of 20, had been called back in 1891 to manage the Irish farm (Fig. 6).  Two years later (June 1893), the repatriated 51 year old John Fitzgerald married 18 year old Mary Mallon of Walsh Island (County Offaly).  This couple had 6 children:  5 girls, and a boy named Thomas.  Thus, the name Thomas Fitzgerald was carried forward in Ireland to a generation that consists of Dr. Thomas Starzl’s second, third, and fourth cousins  (Fig. 3).

But what was the reason for the 1891 swap of the Fitzgerald brothers?  A note in the Clonbullogue marriage registry discovered by Margaret McStay stated that the Thomas Fitzgerald-Katherine Mangan wedding on April 16, 1891, required a “dispensation of the Bishop of Dublin” because of “consanguinity of the third degree”.  The bride and groom were second cousins.  In addition, Katherine was pregnant with a child destined to be stillborn en route to America.  After the ceremony (in the priest’s oratory, not the church), the couple walked 13 miles to an Irish wedding breakfast and from there another 13 miles by foot to the port of debarkation.

Their destination was the Northeastern corner of Nebraska, USA, an area already heavily populated by Irish immigrants in the mid 19th century.  It probably was from this region that John Fitzgerald, the older brother, was summoned back to Ireland in 1891.  In this scenario, the newlyweds (Thomas and Katherine) had been banished from Ireland.  In the one-page series of handwritten footnotes that accompanied her genealogy map (Fig. 4), Maria Leech described the return of John Fitzgerald from his exile in America, but does not say a single word about the exiles, Tom and Katie Fitzgerald.

The scandal that had been “eliminated” from Ireland also was a closely-held secret of the deported American family.  In their Nebraska bible, the marriage of Thomas Fitzgerald and Katherine Mangan was backdated to August 17, 1890.  Nearly 40 years later, the second daughter of the ostracized couple, Anna Laura (nee Fitzgerald) Starzl had produced 2 grandsons:  Tommie, (the future Dr. Starzl) and his one-year older brother, John.

In 1977, Caroline (nee Fitzgerald) Miille, the fourth of Thomas and Katherine Fitzgerald’s 6 girls, produced 2 genealogic studies.  The first accounted for 3 generations of her parents’ progeny (See: Fitzgerald Family Tree & History).  The only inaccuracy was the date of the Thomas Fitzgerald/Katherine Mangan marriage in Ireland.  This was given as August 17, 1890, instead of the McStay-validated church record of April 17, 1891.  All 6 American Fitzgerald girls had married.  Only Caroline had been childless.

Caroline’s other narrative described the arrival of her parents by train at Ponca, Nebraska, and their 10 mile walk to a relative’s farm near Newcastle, Nebraska.  They apparently were penniless since her father, Thomas Patrick Fitzgerald, had to hire out as a laborer for several years to obtain enough money to buy his own farm (See: Fitzgerald Family Tree & History).  Caroline also provided a rambling account of other people, most of whom appeared to be various Fitzgerald family members who had arrived at the time of John Fitzgerald’s migration in 1862 or even earlier.

Caroline also made an attempt (doubtless from memory or verbal history) to reconstruct what had happened to the Fitzgerald’s who never left Ireland, or in John’s case who had been recalled.  This part of her narrative was wildly inaccurate and reflected the fact that their banishment was absolute and included foreclosure of communication with those back home.  In a particularly revealing error, Caroline stated that after John Fitzgerald returned to Ireland “. . . Uncle John married a girl from England . . . and was never heard from again . . . etc.”.

Dr. Starzl eventually saw his ancestral home firsthand.  After giving the Sylvester O’Halloran Surgical Lectureship of the Irish Royal College of Surgeons in Limerick on March 7, 1997, he drove northeast with his wife, Joy, to Clonbullogue for a reunion at 1:00pm with his Irish 3rd, 4th, and 5th cousins (Fig. 7).  The meeting, arranged by Mr. and Mrs. McStay, took place at the home of Thomas and Terese (nee Delaney) Fitzgerald.  The identity of the 40 people in the photograph (See: Fitzgerald Family Tree & History) was later provided by Sister Dolores, one of his 3rd cousins.  At 7:00pm, these Fitzgerald kin disappeared and were replaced by a drove of Mangans.

Both families still owned their original farmlands and were affluent, but most had relocated to villages or cities.  The oldest reunion recipients (some beyond 80 years) knew of the Tom Fitzgerald-Katie Mangan expulsion and filled in details.  For example, the inviolate patriarchal policy had been to burn letters or packages from the American couple or their offspring without opening them.  Despite the impenetrable barrier, Caroline (nee Fitzgerald) Miille described their Irish forbearers with pride albeit with almost no factual information.

In 2002, Michael and Tom Fitzgerald and their wives, Teresa and Bridie (Fig. 8), and others came in a bus to Pittsburgh for a 2 day visit and tour of the Thomas E. Starzl Transplantation Institute.  In 2002, Dr. Starzl and Joy visited Clonbullogue for the second time after giving a lecture “The need for and possibility of a drastic management change for organ transplantation” at Beaumont Hospital in Dublin.  This time, the Fitzgerald and Mangan families were all together.  A large volume of correspondence has resulted from the reunion(s) (See: Fitzgerald Family Tree Reunion). 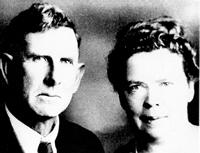 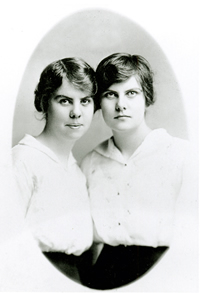 Dr. Starzl’s mother, born Anna Laura Fitzgerald (right), and her older sister, Katherine (left).  Both were presumably in their 20s and not yet married. 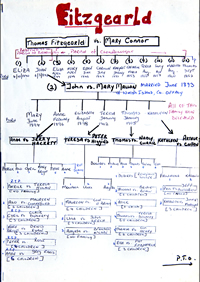 Their only other male child was Thomas (number 12, born 1862), for whom no other information was given.  In 1893, John Fitzgerald (now 51 years old) married 18 year old Mary Mallon and produced the 6 second generation children shown on this map (one male named Thomas, and 5 girls). 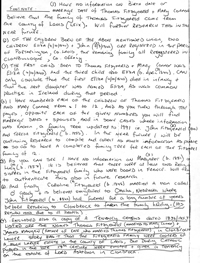 A one-page collection of handwritten footnotes of Maria Leech, accompanied her genealogic maps of the 12 offspring of Dr. Starzl’s great-grandparents.

Footnote 6 refers to John Fitzgerald, the son who was recalled from America to “farm the family holdings” in replacement of child number 12, the exiled 28 year old Thomas Patrick Fitzgerald.

Page 5 of the 8-page Maria Leech study, indicating that she had not been able to trace children 10, 11, and 12 of Thomas and Mary (nee Connor) Fitzgerald.  However, the final entry indicated that Thomas Fitzgerald married Katie Mangan in April 1891.  This was consistent with the McStay study. 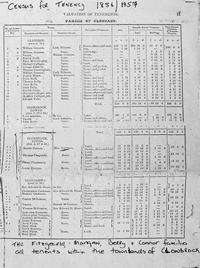 This property had been impounded during the anti-Catholic purges of the previous half century and placed under English overlords.  The lands were remanded to their rightful owners with the advent of Irish independence and were still owned by the family(s) when the McStay’s, and then Dr. Starzl came to Clonbullogue in the 1990s.

A collection of 40 Fitzgerald (or Mangan) relatives on March 9, 1997.  The meeting was at the estate where Dr. Starzl’s grandfather lived until he was 28 years old and was banished with his 21 year old bride Katie (nee Mangan).   The names of all 40 family members can be found in the Fitzgerald Family Tree Reunion.

Tom Fitzgerald (right) and Michael (left) and their wives, Teresa and Bridie.