Beginning in 1958, Thomas Earl Starzl added a new dimension to the practice of medicine by inventing or improving experimental organ transplant operations and ultimately making these procedures broadly applicable in humans.  He was born March 11, 1926 in LeMars, Iowa, the second son of Roman (Rome) Frederick Starzl and Anna Laura (nee Fitzgerald) Starzl.  His parents were the first generation American offspring of Czechoslovakian and Irish immigrants.  Dr. Starzl knew very little about his grandparents’ origins until extensive genealogy studies were undertaken in the 1990s.

Dr. Starzl’s father was editor, publisher, and owner of a semi-weekly newspaper and was in addition a pioneer in the genre of science fiction (Eric Davin:  Pioneers of Wonder - Conversations with the Founders of Science Fiction, Prometheus Books, 1999).  His uncle, Frank J. Starzl also was a journalist who became the General Manager (CEO) of the Associated Press.  Dr. Starzl’s mother had been a registered teacher and then a nurse earlier in life.  Her respect for doctors, including those who treated her during her terminal illness from cancer of the breast (age 50) inspired Starzl to pursue a career in medicine.

As a boy, “Tommie” Starzl worked at every job at his father’s paper, from printer’s devil to reporter.  He later credited his experience of sorting type at the newspaper’s printing section with helping to develop the manual dexterity that served him well in his career as a surgeon.  Although he considered his childhood to be “normal”, it took place (Fig. 1) against a backdrop of a depression that ultimately was relieved by the economic stimulus of World War II.  While compiling a good scholastic record, he became a Boy Scout (Fig. 2), a champion trumpet player and an athlete (Fig. 3 and Fig. 4).

After a stint in the Navy (1944-45), he obtained a B.A. degree in 1947 from Westminster College (Missouri).  During the next 5 years he earned M.D. and Ph.D. (neuroscience) degrees at Northwestern.  The double graduation in 1952 was followed by an internship at the Johns Hopkins Hospital in Baltimore.  Forty years later, he described what transpired next in his autobiography, The Puzzle People, which combined the story of his personal life with an intertwined account of his scientific and medical accomplishments.

During his 7 years of post graduate surgical training at Johns Hopkins (1952-1956), the University of Miami (1956-1958), and Northwestern University (1958-1959), Dr. Starzl acquired a wide-range of skills in general, vascular, and thoracic surgery He then served successively on the surgical faculty of Northwestern (1959-1961), the University of Colorado in Denver (1962-1980), and the University of Pittsburgh (1981-2012).  His first 5 years as a faculty member were partly supported by a Markle Scholarship, a nationally competitive distinction bestowed on exceptionally promising young medical doctors.

During the Scholarship tenure (1959-1964), his academic rank rose from Instructor to full Professor.  His executive duties at Colorado included Directorship of Surgery at the Denver Veterans Administration Hospital from 1962-1972 and Chairmanship of the University Surgery Department between 1972-1980.  In 1980, he resigned the time-consuming Chair and joined the University of Pittsburgh surgery department headed by his long time friend, Henry T. Bahnson (Fig. 5).  Their agreement was that Dr. Starzl would be free of administrative obligations other than those involved in the development of a multiple organ transplantation program.

His decision to leave Denver was influenced by a divorce in 1976 brought by Barbara June Brothers of Hartville, Ohio (1932-2010), whom he had met and married in November 1954.  The union produced three children:  Timothy, Rebecca, and Thomas.  After moving to Pittsburgh, he married Joy Denise Conger, an African-American research technician from Quitman, Texas (Fig. 6).  This marriage has lasted for more than 31 years during which Joy Starzl obtained a Masters degree from the University of Pittsburgh and developed her own career as a certified Social Worker.  In 2012, they share their household with 6 dogs.

Dr. Starzl’s body of work is described in his more than 1600 publications in professional journals, 4 books, and more than 100 textbook chapters.  The collection has been divided into 7 themes.

Compilation of this record began after he completed the first 2 years of medical school at Northwestern.  Then 23 years old, he produced 5 highly cited articles over the next 3 years under the preceptorship of with Horace W. Magoun, one of the founders of modern neuroscience.  After bundling the papers together for his Ph.D. thesis, he lost interest in neuroscience and finished medical school.

The next project, undertaken after completing his internship at Johns Hopkins, was an 18 month full-time study in dogs of complete heart block, a frequent complication of the first human open heart operations.  First, the consequences of heart block were elucidated.  Then, epicardial pacemaking was developed with which to treat the condition in animals and eventually patients.  When his interest in cardiac physiology also faded, and with the suspicion that he had become a dilettante, Starzl described himself in The Puzzle People as “a missile searching for a trajectory”.

A trajectory began to take shape after he returned to surgical resident duties at Johns Hopkins (1954-1956) and the University of Miami (1956-1958).  The first step resulted from discussions with colleagues about the liver’s double blood supply.  The key question was whether hormone- and nutrient-rich portal blood was important for optimum total body metabolism and liver health specifically.  This had been an unresolved subject for nearly 80 years because of the confusing literature about a procedure called portacaval shunt (Eck’s fistula in animals) that diverts portal venous blood around the liver, leaving the organ used dependent on its arterial supply.  The operation was frequently used to treat patients with hepatic cirrhosis.

A canine auxiliary liver transplant model described in 1955 by C. Stuart Welch at Albany Medical College epitomized the controversy.  While leaving the blood supply of the native liver intact, Welch arterialized the extra liver (an allograft) and provided its portal inflow with venous return from the lower part of the body (Fig. 7a).  Despite its high flow blood supply, the transplanted liver dramatically shrank.  Although this was attributed to rejection, Starzl’s alternative explanation was that the auxiliary liver had been deprived of liver-supporting factors in the portal blood.

To test his hypothesis, he developed 2 more liver transplant procedures during 1958-1959:  liver replacement alone (Fig. 7b) and replacement of the liver along with all of the other intra-abdominal organs (Fig. 7c).  In combination, the 3 models generated parallel lines of research.  The pathway termed “hepatotrophic physiology” established metabolic guidelines for design of liver and various intra-abdominal organ transplant procedures while ploughing new ground throughout hepatology and regenerative medicine.

The second pathway culminated in organ transplantation, beginning with the kidney and liver.  In pursuing this objective, Starzl laid much of the empirical foundation of transplantation immunology between 1959-64.  However, successful organ engraftment was inexplicable until he and his colleagues discovered donor leukocytes (microchimerism) in 1992 in the tissues or blood of his various kinds of long-surviving organ recipients. These findings mandated a transformative paradigm shift in transplantation immunology and in immunology overall that provided a roadmap for improvement of therapeutic immunosuppression.  Now in the twilight of his career, Starzl also was able to explain previously enigmatic observations in transplant recipients and reassess his historical clinical achievements.

Most of his clinical milestones can be identified in the archival records by the frequency with which their published accounts have been cited.  Highly-cited articles included descriptions of the world’s first repetitively successful series of kidney transplantation, the first liver and multivisceral transplantations, resurrection of whole pancreas transplant operations, and the first-ever successful alloengraftment of human pancreatic islets.  The adoption of advances made with these organs for thoracic organ transplantation was automatic because of Starzl’s strong friendship with Henry T. Bahnson, an earlier pioneer in cardiovascular surgery.

Although Starzl’s accomplishments depended above all on his introduction of effective strategies of immunosuppression, he also led the way in developing organ preservation.  His generalizable principles of organ procurement and preservation developed between 1958-1963 are identifiable in all further technologic advances in procurement-preservation up to the present day.  It is noteworthy that the key steps derived from his extensive early training and experience in cardiac surgery.

In fact, Starzl’s main practice until he moved to the University of Pittsburgh involved a broad-range of non-transplant patients.  Although very little of this conventional surgery experience was ever formally reported, his partial hepatectomy procedures were exceptions. The historically high mortality with these operations changed in the early 1970s when patients with “unresectable” tumors were referred to the University of Colorado as candidates for liver replacement.  After Starzl showed that many of the tumors could be safely removed, a new era began in which decisions could be made about the relative risks and benefits of partial hepatectomy versus liver replacement.

Whether working in Chicago (at Northwestern), Denver, or Pittsburgh, Starzl’s publications were preoccupied with clinical or experimental innovations.  Many of these innovations were equally applicable in transplant and and non-transplant circumstances.  At all 3 institutions, his VA- and NIH-supported research lab ensured the sustained reciprocal flow of “bench to bedside” and “bedside to bench” investigations.

Dr. Starzl retired from clinical practice in 1991, but remains active in research as Distinguished Service Professor at the University of Pittsburgh.  A research building on the University of Pittsburgh campus named in his honor houses the Thomas E. Starzl Transplantation Institute.  His numerous distinctions include the Medawar Prize (1992), the Presidential Medal of Science (2005) and the Lasker Award for Clinical Science (2012).

The house at 205 Central Avenue, Southwest, LeMars, Iowa where Starzl was born and resided for his first 17 years. Built in 1910, the dwelling and the neighborhood are virtually the same as when he lived there. 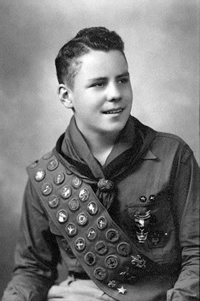 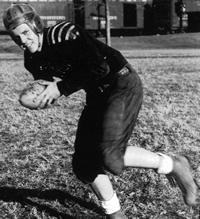 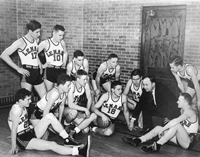 No. 10 on LeMars Bulldog basketball squad of 1943-44. Ten of the 11 players entered military service in the spring of 1944; three were casualties by war’s end. 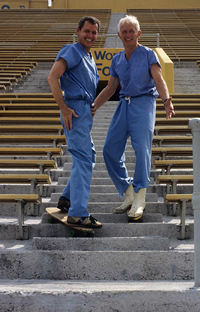 Dr. Starzl with the Pittsburgh Surgical Chairman, Henry T. Bahnson, at the campus football stadium that was demolished in 2000. 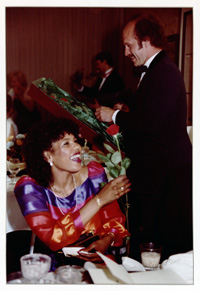