It would be exceedingly difficult to overstate the impact of Dr. Thomas Earl Starzl on the practice of Medicine in the 20th and early 21st centuries. Many of his achievements endure in the lives of his patients and in the work of those who were influenced, directly or indirectly, by his professional ethos. Such endpoints currently lie beyond our ability to measure. Fortunately, there also exists an extensive first-hand account of these efforts in his medical writings, and this website will present this historical but in many ways still current literature as a series of interrelated themes. This approach imposes a sense of orderliness on a large volume of work but this is to a large extent artificial, as many of these themes were concurrent, or were temporarily set aside until they could be readdressed after seemingly intractable barricades had been overcome. Additionally, a thematic summary may in some ways dilute appreciation of the scope of Starzl's contributions, since many themes contain multiple subcategories, any one of which would independently suffice for a successful medical career. A high level view of these separate areas of investigation is shown in Table 1.

Some selected highlights of this collection are abstracted here, and expanded within individual sections that focus upon specific themes of investigation.

The name of Thomas E. Starzl is first and foremost synonymous with liver transplantation. Starzl not only single-handedly developed the surgical techniques necessary for both donor and recipient operations at a time when organ transplantation was considered unachievable, but he also provided the conceptual breakthroughs necessary to allow a foreign organ to exist for an extended time within the body of an unrelated person.

It is difficult for the modern reader, knowing the outcomes, to reproduce the vacuum of hopelessness that existed in that era regarding organ transplantation. It is even less likely that one would stake a career on the prospect of venturing deeply enough into an area of obvious science fiction in an effort to save those standing at the brink of nonexistence. This website stands as a post hoc testament to the man who actually did that.

The years 1945-1992 encompass the theoretical beginnings of transplantation and include the year in which liver transplantation was recognized as a valid clinical service. Figure 1 illustrates the top 20 individuals who were cited as primary (first) authors on medical articles of liver transplantation during this period. All of these individuals have made unique contributions and are deserving of recognition in their own right. However, the overarching predominance of Starzl's achievements is uncontestable and is clearly highlighted in this figure.

Kidney transplantation was a surgically less demanding operation than implantation of the liver, but in the 1950s the barriers to long-term kidney allograft survival remained insurmountable. Dr. Starzl realized that the road to liver transplantation must of necessity travel through the kidney, and he devoted himself to dissecting this riddle. In 1963 he overthrew the established wisdom regarding the irreversibility of organ rejection by showing that immune rejection of the kidney could be successfully reversed by the timely addition of corticosteroid medication. Again, as we look back from a perspective of over 331,000 patients whose lives have been extended by kidney transplants, it is difficult to imagine that a single individual could precipitate such a massive mid-course correction in medical practice. But the record is clear and the results are unequivocal. The current success in kidney transplantation links directly back to Starzl's dog experiments and subsequent human kidney transplant series that leapfrogged the work of other equally adept investigators who were constrained by the prevailing concepts of the time.

The first successful kidney transplant on identical twins (without the possibility of rejection) by Dr. Joseph Murray at the Peter Bent Brigham Hospital on December 23, 1954 was a technical tour de force and ushered in the era of modern kidney transplantation. Murray was appropriately awarded the Nobel prize in 1990 for his achievements. However, if one examines the contemporary kidney transplant literature (Figure 3), arbitrarily selecting the encompassing period of 1945-1979, it is again clear that Dr. Starzl's contributions are at the forefront. His over 1600 citations dwarfed those of the luminaries of kidney transplantation. Many years later, a number of Dr. Starzl's long-surviving kidney transplant patients would reprise their role as pioneers of transplantation by confirming that significant fragments of the donor immune system persisted in the recipient pari passu with organ allograft acceptance, or, in common parlance, "tolerance". This first-hand experience of long-term transplant organ survival would again force Starzl into the position of an iconoclast against prevailing medical opinion with his conclusion that not only were organ and bone marrow transplantation intimately related, but somehow a peaceful coexistence between donor and recipient immune active cells was a necessary precondition to long term survival of transplanted organs or cells.

Work in the 1940s and 1950s replicated naturally occurring chimeras (i.e., animals with in utero exposure to foreign blood cells) to study immune interactions underlying the permanent acceptance of the foreign blood cells by these animals. Experimental weakening of the host immune system by, for example, irradiation with subsequent blood cell cell delivery could lead to "radiation chimeras" with one set of genes in the body organs and another in the blood cells. This formed the basis of bone marrow transplantation. In contrast, organ transplantation was thought to consist of the implantation of an antigenic but otherwise immunologically inert organ (i.e. kidney) into a recipient with an immune system that would need to be chronically weakened to prevent rejection.

In 1962 Starzl pointed out that an animal with blood cell chimerism was more likely to accept subsequent tissue grafts from the same donor without the need for chronic immunosuppression, if a certain critical time threshold could be successfully crossed. The tools to study this so-called mutual adaptation in any detail had yet to be developed. However, the concept of aiming for tolerance, as opposed to chronic immunosuppression, as the desired endpoint in organ transplantation suffused Starzl's approach to drug therapy. The early dog kidney transplant experiments served not only as the basis for successful clinical transplantation, but also provided evidence of long-term tolerance when using Starzl's prototypic drug regimen incorporating pre-transplant induction therapy and a steroid-sparing approach.

Thirty years later, the ability to genetically identify chimeric cells in extremely small numbers enabled Dr. Starzl and colleagues to discover that such donor cells persisted in the bodies of long-term kidney transplant recipients who were clinically tolerant of their grafts. This finding has been extended to patients who have received other types of organ transplants, and even to bone marrow transplant patients who were previously thought not to retain any vestige of their own blood cells. Dr. Starzl realized this finding as conceptually unifying bone marrow and solid organ transplantation. He interpreted this as evidence that "mutual accommodation" is an underlying principle in graft cell or organ tolerance, and that the small population of chimeric immune active cells, i.e., microchimerism, was active in, and represented evidence of, this process. This discovery has been subsequently confirmed in many other laboratories and the implications of this finding are presently the subject of intense investigation.

When the time period incorporating the discovery of microchimerism and subsequent widespread confirmation of its existence is examined (arbitrarily 1991-2005), the papers authored by Dr. Starzl are again seen to comprise the most heavily cited publications in this area of the medical literature (Figure 4).

In addition to the documented impact that Dr. Starzl’s work has had in multiple areas of Medicine, the sheer volume of the publications appears unlikely to be soon surpassed, and the Web of Science (WoS) records 2281 publications in a total of 248 journals. In one remarkably productive period spanning 15 years (1985-1999 inclusive), from ages 59-73, Starzl published over 50 papers annually. Within this time frame, that number surpassed 100 per annum for a consecutive period of 8 years (1988-1995 inclusive) with a peak output of 197 publications in 1991. Assuming a 365 day work year- which seems appropriate- this averages to one publication every 3.5 days for 15 consecutive years with a peak of 1.8 days per publication in 1991. (Figure 5)

WoS also provides a high ranking to these publications on the basis of citation analysis. The entire output of 1582 publications for the 1985-1999 period received an average of 35.2 citations per paper, with an h-score of 117 (i.e., 117 publications were cited 117 times or more). During this period, major topics included but were not limited to: liver surgery for cancer (2 publications with 434 and 436 citations), review and update of liver transplantation (514 citations), posttransplant lymphoproliferative disorders (610 citations), introduction of the immunosuppressant FK506 (Tacrolimus) (775 citations) and the primary papers describing transplant-associated microchimerism (2 publications with 559 and 819 citations).

The year 1985 also marked the first time that Starzl’s papers were cited over 1000 times per annum in the literature. This pattern has continued uninterrupted to date (27 years) with 1112 citations for the present year as of October 2012. The annual citation frequency exceeded 2000 per year for the period 1989-2007, with a peak of 4224 citations in the year 1996 (i.e., 1 citation every 30 minutes). When viewed from the overall perspective of his (to date) 63 year career (1950-2012 inclusive), publications by Starzl have been cited 83,721 times, averaging 1329 citations per year Figure 6. When looked at from the perspective of individual publications, Dr. Starzl has had 213 different papers each cited between 100-1100 times. A breakdown of citation frequency on a per paper basis is given in Table 2.

The Lancet is widely recognized as one of the most important medical journals in the world. Although The Lancet has been publishing scientific articles since 1823, the Web of Science database’s coverage of this journal begins in 1945 and includes over 184,000 individual records. The Lancet currently boasts an Impact Factor of 38.278 . Dr. Starzl has three papers in The Lancet that are among the top 386 (0.2%) most-cited papers in the history of the journal.

Hepatology is an important medical journal that focuses on diseases of the liver. It was first published in 1981 and is currently (2011 JCR) ranked 2nd out of 74 journals in the ISI category of Gastroenterology and Hepatology. For the past ten years Hepatology has maintained an Impact Factor higher than 10.

Five of Dr. Starzl’s papers appear in the top 500 (~5%) of the approximately 10,000 articles and reviews in the history of the journal. Dr. Starzl’s review of liver transplantation (Starzl TE, Iwatsuki S, Van Thiel DH et al. Evolution of liver transplantation. Hepatology 2:614-636, 1982) was the most cited article in the journal at that time and remains today among the top 20 (~0.2%) most cited papers in the history of the journal. 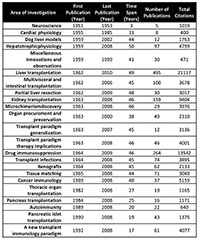 T.E. Starzl's Areas of Investigation arranged by year of first publication and including years of publication, numbers of publications and total citations from 1951-2012 in the Web of Science database.

The authors were ranked according to the number of times their 1st author publications were cited by the collection and that figure is represented by the size of the circles. The Y-axis “Total Times Cited” shows the sum times cited of all publications in which that author is a listed co-author.

This chart shows the top 20 most cited authors in the HistCite collection “Kidney Transplantation, 1945 – 1979.”

T.E. Starzl's Annual publications from 1950-2012 in the Web of Science database. 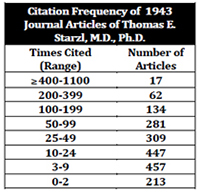