Dr. Henry T. Bahnson, known to many as “Hank,” was one of Dr. Starzl’s closest friends, as well as a longtime colleague. Dr. Bahnson was born in Winston-Salem, North Carolina, and graduated from the local Davidson College before heading to Harvard Medical School to complete his medical degree. After graduation, he moved to Baltimore to complete his residency at Johns Hopkins, where, in 1952, he met the newly-arrived intern Dr. Tom Starzl. Bahnson was a gifted surgeon, focusing much of his energies on heart surgery. He worked closely with Alfred Blalock, the surgeon who did the first constructive heart surgery, and accompanied him on a trip around Europe, quickly learning to perform the procedure himself. His own discoveries and technical achievements were no less impressive; he performed early excisions of aneurysms, and was an early pioneer in grafting new tissue in order to repair the damaged blood vessels. Starzl was impressed by Bahnson’s drive, skill, and friendliness. The two became close, Bahnson even serving as the best man in Starzl’s 1954 marriage.

Bahnson remained at Johns Hopkins until 1963, when he was offered the job of the Chairman of Surgery at the University of Pittsburgh Medical School. Even with a proud legacy of surgical acumen, Bahnson achieved new heights as an administrator, building the small school program into a world-renowned center for surgery and research. He was instrumental in recruiting some of the biggest names in medicine to come to Pittsburgh, Starzl foremost among them. Starzl was looking to leave the University of Colorado to an institution that was more receptive to his use of cyclosporine as an antirejection drug. After making the difficult decision not to move to UCLA, which he details in The Puzzle People, Starzl turned to his old friend, who had been following the transplantation field closely himself. Bahnson had been among the first in the United States to perform the heart transplantation surgery, first done in South Africa in 1967 by Christiaan Barnard. Starzl accepted the position and arrived in Pittsburgh on New Year’s Eve, 1980. Bahnson continued to support his friend in all of his endeavors, helping to strengthen the fledgling transplantation program and getting involved in lobbying for the creation of a national organ procurement program. (Doc. 1, Doc. 2, Doc. 3)

Bahnson retired from his position in 1987, the longest serving Chairman in the University’s history. He and Starzl remained close friends for years to come. Even in retirement, his energy was limitless; he was an avid skier, mountaineer, and even decided to pick up the harmonica, patenting a new version of the instrument after becoming a more-than-proficient player. Bahnson left his legacy on the University of Pittsburgh and on Tom Starzl, believing in the potential inherent in each. Dr. Bahnson passed away in 2003, at the age of 82. In a touching speech given at his memorial service, Starzl characterized Bahnson as “a genuinely noble person who will never be forgotten.”(Doc. 4)

Dr. Bahnson’s papers are also held at the Archives Service Center, and are open for research.

Dr. Starzl's tribute to Dr. Henry T. Bahnson – posthumous recipient of the “Pulse of Pittsburgh” Award of the American Heart Association on November 6, 2013 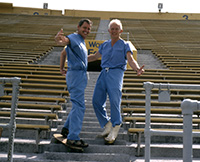 Dr. Starzl’s extensive plan for establishing the transplantation program at the University of Pittsburgh.

Dr. Starzl and Dr. Bahnson were involved with establishing organ procurement programs; here, Dr. Starzl discusses how to prioritize patients on the waiting list for a kidney transplant in an ethical way.

Dr. Starzl acknowledges how Dr. Bahnson’s faith in him created an environment in which groundbreaking research could be done.

At a memorial service held after Dr. Bahnson’s death, Dr. Starzl provided a moving eulogy for his longtime friend.