Robert Casey was Governor of Pennsylvania from 1987 to 1995, and also a high-profile heart-liver transplant recipient. Though born in New York, Casey was raised in eastern Pennsylvania; his family was from Scranton. Casey attended the College of the Holy Cross in Worcester, Massachusetts, and graduated from George Washington University in 1956 with his JD. He won his first election to political office in 1962, when he became a Democratic Pennsylvania State Senator; he tried, and failed, running for the office of governor three times in the 1960s and 1970s. He did, however, serve as the state’s Auditor General from 1969 to 1977, during which he was praised for his effective handling of Pennsylvania’s finances. In 1986, he again decided to run for the gubernatorial position, this time finally succeeding. He was inaugurated in 1987, and stayed in the position until January 1995, serving two terms.

The doggedly determined Casey, who had triumphed over political setbacks, would soon face seemingly insurmountable medical challenges. Only a few months after becoming governor, he suffered a heart attack and underwent a quadruple bypass operation. In late 1990, he was given an ominous diagnosis of amyloidosis, a genetic disease that caused proteins to build up in the organs blood vessels. Knowing that there was no treatment nor cure, Casey threw himself into his work as governor, but his health continued to deteriorate. In May 1993, Casey stumbled across a gift copy of Dr. Starzl’s memoir The Puzzle People and decided to place a phone call. Starzl, who had never met the governor, was surprised to hear from Casey, and even more surprised to hear about the amyloidosis. Starzl suggested that a liver transplant could potentially cure the disease. (Doc. 1) Casey leapt at the chance, but the solution would not be so simple. Further studies showed that the damage to Casey’s heart was too great; he would need not one transplanted organ, but two. The heart-liver transplantation was still relatively rare, but Casey decided to forge ahead. Casey was placed on the waiting list, and after a day, a suitable organ donor was found. The operation proceeded successfully, and Casey resumed his duties as governor six months afterwards.

Casey kept up his correspondence with Starzl, whom he honored with the Governor’s Award for Excellence in Science in 1994. (Doc. 2) Casey became an advocate for healthcare reform and organ procurement programs, including passing legislation allowing for organ donor identification on driver’s licenses. However, the case was not without its issues; the governor’s extremely short time on the waiting list sparked outrage from the media and the families of those who had been waiting for organs for months or years at a time. Starzl spoke about the ethics of the case, describing the way the system was set up to prioritize the patients with the greatest immediate need, and the different waiting lists that existed for people who needed one organ as opposed to multiple transplants. (Doc. 3)He stood firmly by his decision, and responded personally to many who criticized the speed of Casey’s transplant. Regardless of the controversy, Casey’s fortitude and quick recovery impressed many, including his political opponents. Casey passed away in May 2000. 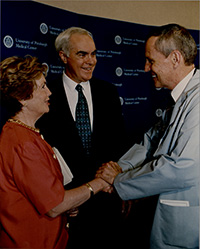 The day after receiving Governor Casey’s phone call, Dr. Starzl replied with his opinion that a liver transplant could cure the amyloidosis.

Dr. Starzl discusses the ethics of the Casey case at a 1995 meeting of the American Academy of Otolarygology.