Dr. Shunzaburo (Shun) Iwatsuki was one of Dr. Starzl’s earliest Fellows. Iwatsuki was born in Japan, graduating with his MD from Nagoya University in 1965 before emigrating to the United States to further his medical education. He came to the University of Colorado in 1971, focusing his studies on combatting liver disease, an interest that naturally coincided with organ transplantation. After spending two years with Dr. Starzl in Colorado, he briefly returned to Japan to become Chief Transplant Surgeon at Chukyo Hospital in his hometown of Nagoya. By 1979, he had returned to the University of Colorado as an Assistant Clinical Professor. Iwatsuki and Starzl grew close as the latter began considering moving his transplant program away from Colorado in order to pursue the development of cyclosporine. After a period of deliberation, described fully by Starzl in The Puzzle People, Starzl turned down an opportunity to move to the University of California at Los Angeles; Iwatsuki, who had wholeheartedly been behind the move, trustingly replied, “Wherever you go, I come too!”[ref 1]

Shortly afterwards, Dr. Starzl decided to move to the University of Pittsburgh to establish his new program there, arranging for Iwatsuki to be brought along with him. Iwatsuki, an extremely skilled surgeon, became an Assistant Professor of Surgery upon their move in January 1981. In a 1983 letter to Dr. Henry Bahnson, Starzl describes Iwatsuki’s surgical acumen, his skill as an instructor, and his major contributions to medical literature, concerning transplantation, general surgery, and developments in immunosuppression. (Doc. 1) Iwatsuki was in part responsible for the stellar performance of the kidney transplant program in Pittsburgh, as well at the liver program. He was an integral part of the training of the staggering number of liver transplant surgeons in the 1980s; his relationship with the Fellows, as well as his affection for Starzl, can be seen in his organization of Starzl’s 60th birthday party. (Doc. 2) He remained an important part of the Transplantation Institute, focusing on hepato-pancreatico-biliary surgery, until his retirement in 2000.

Iwatsuki and Starzl’s correspondence looks back at a career of friendship and professional respect; the folders are full of numerous recommendations Starzl wrote regarding his accomplished colleague. Working closely together for over two decades, Dr. Starzl’s regard for the man who stood by his side during the establishment of the groundbreaking University of Pittsburgh transplant program is clear. 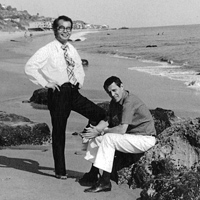 Starzl with Shun Iwatsuki on the beach at Malibu, 1980

Dr. Iwatsuki was responsible for arranging a 60th birthday party for Dr. Starzl- affectionately called “Daddy” by the Fellows he trained.