Dr. Kendrick A. Porter was an esteemed pathologist who was instrumental to Dr. Starzl’s research on the intricacies of organ transplantation and the process of rejection on a cellular level. The British-born Porter spent the majority of his career at St. Mary’s Hospital and Medical School in London. He did spend some time in Boston in the 1950s, working with Joseph Murray and Robert Schwartz on studying the effects of using radiation as an anti-rejection tool in bone marrow transplantation. Porter and his colleagues were disenchanted by the harmful side effects of irradiation as a tool, and Schwartz later went on to spearhead the use of 6-mercaptopurine as one of the first instances of a chemical method of inducing immunosuppression. Back in London, Porter crossed paths with a young Roy Calne, who was beginning experiments on kidney transplants in dogs. Seeing Calne’s own disappointing results with radiation, Porter advised Calne on the outcomes of the Boston radiation studies and directed him to the use of 6-mercaptopurine, which led to Calne’s first positive results.

Starzl met Porter at a meeting in 1963, where Starzl was making waves by revealing the success his team was having by controlling rejection with the combined use of Imuran and prednisone. After examining the patient charts Starzl had brought with him to the meeting, an intrigued Porter visited Starzl in Denver to learn more about his groundbreaking work. The two struck up a correspondence and close working relationship, despite the trans-Atlantic separation. Porter contributed to Dr. Starzl’s 1964 book Experience in Renal Transplantation with a chapter on transplant pathology that Starzl described as “a classic which was years ahead of the field.”[ref 1] Though Porter was impressed with Starzl’s successes in kidney patients, Starzl’s real goal in the 1960s was the liver. Porter agreed to help Starzl track down the differences in controlling rejection in the two organs; Starzl would perform the liver transplant trials in dogs in Denver, and would then ship the tissue samples to London to be examined by Porter. Porter’s results filled in much of the information Starzl’s team needed about the process of rejection at a cellular level, comparing the processes of acute versus chronic rejection. Porter’s discoveries informed and guided the work being done in Starzl’s lab by researchers like Carl Groth and Antonio Francavilla. (Doc. 1, Doc. 2) Over a decade of study finally came to a head in 1972, when Starzl, Francavilla, and Porter demonstrated the role of insulin in the maintenance of normal liver structure, function, and capacity for regeneration.

The correspondence between Porter and Starzl continued throughout the years. Starzl often wrote to his British colleague upon discovering a new concern or publishing a new paper on rejection. (Doc. 3) Even after Porter’s retirement, he kept up on Starzl’s work, writing with interest about developments in immunosuppressive therapy and issues like xenotransplantation. (Doc. 4) Dr. Porter passed away in the spring of 2013. 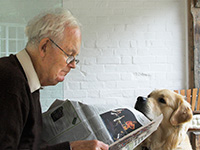 Dr. Kendrick Porter with his dog.

Dr. Porter’s work was often essential to studies being done by researchers in Dr. Starzl’s department.

The correspondence between the two men is filled with data illuminating their decades of mutual research.

Dr. Porter kept up on Dr. Starzl’s research, and was particularly intrigued by developments in the field of xenotransplantation.