One of Dr. Starzl’s early success stories was also one of his most emotional and tragic. In 1967, after a four-year moratorium on trials of liver transplantation, Dr. Starzl’s team in Denver attempted to restart the program, bolstered by developments in immunosuppression, organ preservation, and surgical technique. Seven female children in the summer of 1967 underwent liver transplantation in an attempt to treat various maladies. Nineteen-month-old Julie Rodriguez was one of these girls. Born to Louise and John Rodriguez on January 2, 1966, Julie was a happy and healthy baby for the first year of her life. At about 13 months, however, she was diagnosed with liver cancer; she came to Children’s Hospital in Denver in the spring of 1967, accompanied by her mother, Louise. 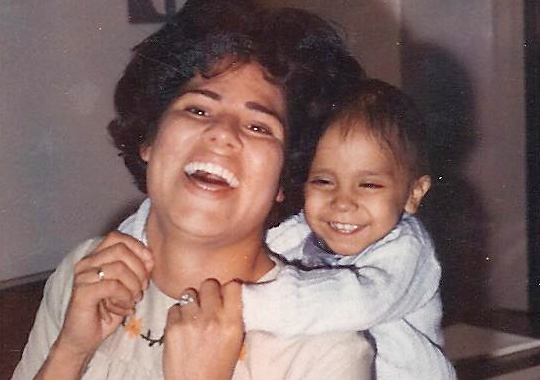 Julie and her mother, Louise, share a happy moment in November 1967,
4 months after her transplant.

As noted in The Puzzle People, Dr. Starzl and his team believed that “an ideal use of liver replacement would be for patients with cancer that originated in the liver and could not be removed with any lesser procedure.”[ref 1] After meeting with Julie and her mother, Dr. Starzl performed Julie’s liver transplant on July 23, 1967. While she was in the hospital, Julie charmed everyone with her vivacious personality and her beauty- Dr. Starzl would remark that she “became a metaphor for courage and human progress.”[ref 1] In an insightful and emotional memoir of the 18 months that Julie lived in Denver, Louise Rodriguez remarked on Julie’s happiness despite the trials of constant surgeries and her pain. “She really was a joy,” Louise recalled; “even when she was sick, she never showed pain or cried.” (Doc. 1)

Despite Dr. Starzl’s hopes for the liver transplant being a successful treatment, Julie’s cancer had spread and tumors were recurring in other organs, including her new liver. Julie passed away on August 26, 1968, at 2 years, 7 months. She had lived with her transplanted liver for 400 days, and was the first successful case of a transplant patient living longer than a year. Though she had showed that liver transplantation was a feasible procedure with serious potential, this knowledge did little to dull the pain of losing a child who was so dearly beloved, not only by her family, but by the entire Children’s Hospital staff, particularly Dr. Starzl’s transplant team.

Julie Rodriguez has never been forgotten—her memory lives on in many ways. One of Dr. Starzl’s dearest possessions is a portrait of Julie done by the Swedish artist Dietrich Grunewald; to this day, it hangs in his office, a touching reminder of the wonderful child, a very personal story in the midst of the vast saga of liver transplantation. The Rodriguez family stayed in close contact with Dr. Starzl over the years, exchanging letters and Christmas cards regularly. The Archives contains a number of these letters and reminiscences, including the aforementioned memoir by Louise, letters from Julie’s siblings, and a very early video recording of Julie’s first Christmas, recorded just months before she would receive her first diagnosis. 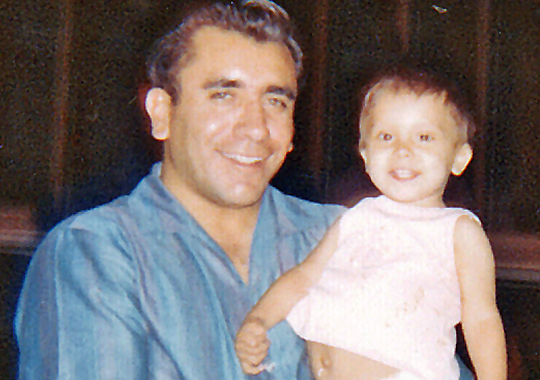 Julie with John Rodriguez, her father, a man who Dr. Starzl referred to as a “dignitary in every sense of the word—throughout all of his life.” 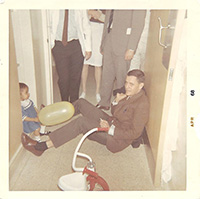 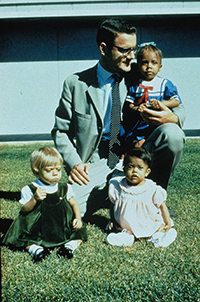 Professor Carl Groth with 3 long-surviving liver recipients in the summer of 1967.

Julie Rodriguez is on Groth’s knee. 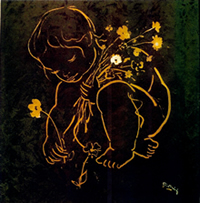 The Grunewald portrait of Julie, one of Dr. Starzl’s most treasured possessions. 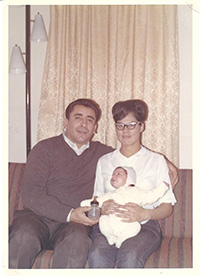 Julie with her parents, Louise and John. Julie was described as a happy and beautiful child, even in the face of her severe illness.

A memoir written by Louise Rodriguez in 2011 provides a first-person account of Julie’s time in Denver.