Dr. Andreas “Andy” Tzakis is a former fellow who trained with Dr. Starzl and went on to become one of the leaders of the next generation of transplant surgeons. Born in Greece, Tzakis graduated from the University of Athens School of Medicine in 1974 before travelling to the United States for additional medical training. He completed internships and residencies in New York, first at Mt. Sinai and later at SUNY at Stony Brook, before applying for a fellowship with Dr. Starzl during his early years in Pittsburgh. (Doc. 1) Tzakis’ fellowship began in 1983, and, though Starzl admired his work ethic, he doubted his technical skills as being too clumsy to excel at the intricacies of liver transplant surgery. “We have talked to Andy about this but he is convinced that we are wrong and he is determined not to settle for smaller fish,” Starzl wrote in a 1984- one of the few times he was to be proven wrong. (Doc. 2) With extreme dedication of time and training at his own initiative, Tzakis’ skill with the scalpel improved dramatically, leading Starzl to recall that “the process had been slower than with many others but it may have been the most complete. He had become one of the best surgeons in the world.”[ref 1] Indeed, Tzakis became a most invaluable part of the Pittsburgh transplant team as he moved through the ranks to eventually become a Professor of Surgery at UPMC in 1994. During his time in Pittsburgh, he accumulated many experiences and pioneered many emerging areas of transplantation. He was part of the team responsible for the world’s first successful pancreatic islet transplantation in January 1990, which Tzakis reported on in The Lancet. He was also interested in multivisceral transplantation, and was part of the team of doctors caring for Stormie Jones, performing her second liver transplant in February 1990. He developed a new surgical technique in liver transplantation, a decidedly long way from the surgeon Starzl had worried about in 1983. (Doc. 3). He also demonstrated his capability for administration and advocacy, particularly in the quest to improve organ allocation processes. (Doc. 4).

Tzakis left Pittsburgh in July 1994 to become Professor of Surgery at the University of Miami, moving to the city where his mentor Starzl had first become intrigued by the liver in the 1950s. (Doc. 5). In his letter of departure to Starzl, Tzakis wrote, “Alexander the Great once said of his teacher: “To my father I owe my life…, to my teacher I owe my good life…” I am in eternal debt to you.” (Doc. 6 and Doc. 7) Tzakis continues to be a leader in the transplant field, eventually becoming the founding director of the Miami Transplant Institute in 2006. The collection of correspondence between Tzakis and Starzl in the archive shows the evolution of the former from a “clumsy” surgeon to a talented trailblazer and mentor in his own right. 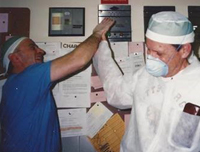 Dr. Tzakis expresses his initial interest in coming to Pittsburgh.

Dr. Starzl commends Tzakis as being a “dogged worker, highly motivated, and intelligent,” but expresses doubt about his future in liver transplantation

One of Tzakis’ technical improvements to the liver transplant surgery.

Starzl’s glowing recommendation for Tzakis’ application for a position at the University of Miami.

Tzakis bids farewell to his mentor.

Starzl’s reply to the above letter, wishing Tzakis well in his new position in Miami.