Dr. Starzl’s second foray into laboratory research took place after his first year of surgical training at Johns Hopkins, one of the hand full of hospitals where the development of open heart surgery was underway.  One of the dread complications of the new operations was damage to the cardiac conduction system that resulted in a dangerous slowing or complete stoppage of the heart beat (heart block).  Dr. Starzl discontinued all patient care duties for 18 months beginning in June, 1953, to study the adverse physiologic consequences of this complication and then how to reverse them.  Because there had never been a reliable experimental model of heart block, the first step was to develop a procedure in dogs (Figure 1), and determine its effect on heart functions.  A second requirement was the development of a canine treadmill (Figure 2) with which to determine the effect of exercise on the deranged heart.  The ultimate objective was to devise a method of treatment and accurately delineate its effectiveness. 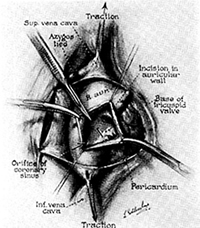 One of the detailed visual depictions that characterized many of Dr. Starzl's publications, this one on how to surgically produce heart block 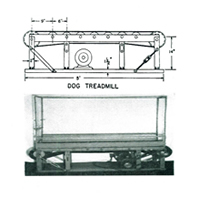 The treadmill Dr. Starzl and his colleagues invented for the heart

Citation frequencies of articles referenced in this Discussion (1955-2011).

Annual citation frequencies of all publications related to theme of cardiac physiology (1955-2011).