During 1956-58, Dr. Starzl developed his canine liver and multivisceral organ transplant procedures (See: The Dog Liver Models) as tools with which to study the liver’s unique double blood supply (Figure 1).  It was known that the hepatic artery(s) accounted for about 15% of the organ’s total blood flow.  The other 85% consisted of portal venous blood returning from the pancreas and other non-hepatic abdominal organs.  In 1893, Ivan Pavlov’s Russian team reported in dogs that diversion of this portal blood around the liver by portacaval shunt (Eck’s fistula) caused liver shrinkage, protein intolerance (termed “meat intoxication”), body wasting, and lethal central nervous system complications.

A half century later (the 1940s), portacaval shunt was introduced clinically to treat complications of portal hypertension (Figure 2). The possibility that the dire consequences in dogs might occur in humans fostered research in many surgical research laboratories.  These efforts were frustrating.  In 1961, J.L. Bollman, the world’s leading authority on experimental and clinical portacaval shunting, commented that “In the 83 years since it was first reported [1877], the Eck fistula has been reasonably successful in hiding its secrets as well as giving rise to many additional questions fundamental to an understanding of the functions of the intestine, liver, and brain” (Physiologic Reviews  41:607-621, 1961).

Starzl’s experiments ultimately demystified the pathophysiology of Eck’s fistula beginning with observations of suboptimally revascularized auxiliary liver allografts (Figure 3). However, the key experiments were done with non-transplant double liver fragment models.  In these models, one of the main portal vein branches was supplied by part or all of a dog’s portal venous drainage while the other main branch was provided with venous return from alternative sources:  e.g. the inferior vena caval venous return from the lower body and hind quarters (Figure 4) [ref 1].

In the most illuminating double liver fragment preparation [ref 2], portacaval shunt was followed by continuous infusion of insulin or other candidate hepatotrophic factors into one of the defunctionalized portal vein branches but not the other (Figure 5).   In the insulin-treated, but not in the control fragment, the atrophy, hyperplasia, organelle disruption, deglycogenation and other changes of portacaval shunt were completely prevented.  Insulin was thereby identified as the principal hepatotrophic molecule in portal blood.

Insulin was, in fact, only the first member to be identified of a diverse family of 8 molecules, all others of which perfectly mimicked the hepatotrophic effects of insulin (Figure 6) [ref 3]. Although none enhanced hepatocyte proliferation when infused into intact animals, all 8 augmented preexisting hyperplasia.  The second of these 8 factors to be discovered, then called hepatic stimulatory substance (HSS), was demonstrated by Starzl in 1979 in a cytosolic extract from regenerating dog livers [ref 4] and later renamed “augmenter of liver regeneration” (ALR) [ref 3].

After a 14 year search for the identity of ALR, its molecular structure and expression in the rat, mouse, and human were elucidated [ref 5].  The mammalian DNA of ALR has 40-50% homology with the dual function nuclear gene scERV1 of baker’s yeast (Saccharomyces cerevisiae).  The gene provides part of the mitochondrial respiratory chain of yeast and also plays a critical role in cell replication.  In the mouse, knockout of the ERV1 gene during embryogenesis is mutant-lethal.  However, a study of mice with liver-specific conditional deletion of ALR showed that this peptide is required for mitochondrial function and for liver-dependent lipid homeostasis [ref 6].

In addition to the diverse family of 8 hepatotrophic factors, 2 molecules with specific anti-hepatotrophic qualities were identified:  transforming growth factor β, and the immunosuppressant rapamycin (Figure 6). These discoveries expanded hepatotrophic physiology into multiple research areas of metabolism and regenerative medicine.  The laboratory research had immediate clinical implications.  With the demonstration that portal diversion severely damages the liver, human portacaval shunt for the treatment of complications of portal hypertension was greatly reduced.  However, a new use emerged.  The degraded liver function caused by the procedure was used to palliate human glycogen, cholesterol, or alpha-1-antitrypsin storage diseases.  In turn, such palliation identified heritable storage disorders that could be effectively treated with liver replacement.

Another dimension of hepatotrophic physiology was the liver regeneration that follows partial hepatectomy.  No matter how much is taken out, the portion of liver that remains is restored to the original size within 3 weeks in humans, and far more rapidly in animals (See: Partial Liver Resection).  In transplant-specific studies, it was shown in rodents, dogs, and ultimately humans that a “small (or large) for recipient size” liver allograft promptly normalizes its volume to that appropriate for the individual recipient.  What initiates this liver regrowth, or alternatively down sizes the liver, and then stops the adjustment at just the right volume has been a question of “hepatotrophic physiology” that has remained enigmatic.

Figure 7 shows the annual citation frequencies of publications referenced in this Discussion. That these papers reflect just a part of Dr. Starzl's extended impact in this area can be seen by comparison to  Figure 8, which shows the overall annual citation frequencies of all articles within this Theme. Figure 9 offers a heat map showing the citation pattern of each individual paper in this group. Placing the mouse over each box will call up the article title, and clicking the box will allow access to a download page for that article.

Double blood supply of the liver 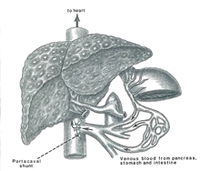 Acute shrinkage of auxiliary liver allograft (right) that was not provided with normal portal blood. The 2 livers were originally the same size. 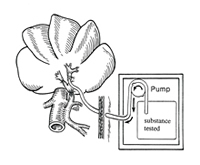 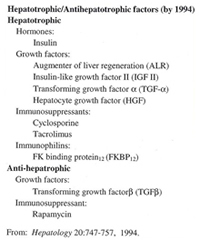