Almost all drugs or drug combinations introduced by Dr. Starzl to control graft rejection have been used to ratchet down the immunity of patients suffering from autoimmune diseases (Figure 1).  The list of treatable disorders increased exponentially with the transition of baseline immunosuppression from azathioprine to cyclosporine and then from cyclosporine to tacrolimus.  Non-surgeon members of Dr. Starzl’s team described tacrolimus-induced remission of more than a dozen disorders during the first 2 years of the drug’s availability (1990-92) [refs 1-3].  As expected, the penalties of deliberately weakening immunity were an increased risk of infection and newly formed (de novo) malignant tumors.  The use of both cyclosporine and tacrolimus was further limited by their irreversible damage of the patients’ kidneys, nervous system, and pancreatic islets.  In addition, a drawback was that the autoimmune diseases promptly recur following discontinuance of immunosuppression.  Nevertheless, the proof of principle efficacy of immune depression has stimulated a search for less toxic drugs and for discrete immune system targets that may be associated with specific disorders. 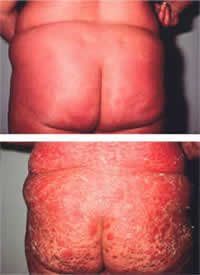 Posterior view of patient with body-wide psoriasis before and a few days after beginning tacrolimus.

Annual cumulative citation frequency for all publications within Theme of Autoimmunity