Transplantation was defined as a branch of immunology by the demonstration in 1944 by Peter Medawar (Fig. 1) with Thomas Gibson that allograft rejection is an immune reaction.  A decade later, Billingham, Brent, and Medawar showed that infused leukocytes obtained from a donor spleen were not rejected by the incompletely developed immune system of newborn (neonatal) mice (Nature 172:603-606, 1953) (Fig. 2, outer circle). Shortly thereafter, JM Main and RT Prehn accomplished the same thing by infusing donor bone marrow cells into adult mice whose competent immune system had been deliberately weakened by irradiation (Main JM, Prehn RT:  J Natl Cancer Inst  15:1023-1029, 1955) (Fig. 2, inner circle).

In both kinds of altered mice, donor leukocytes now made up much, if not most, of the immune cellular system.  This condition is called “donor leukocyte chimerism”.  The term was derived from the ancient word chimera with reference to an animal composed of parts from 2 animals (for example, a unicorn).  In science and medicine, however, chimerism usually refers to the coexistence of red blood cells and/or white cells (leukocytes) produced by the bone marrow of genetically different animals.  In the context of immunology, the tolerance-associated cells are leukocytes.

The mice endowed with florid donor leukocyte chimerism now could accept skin and other tissues (or organs) from the original leukocyte donor, but not from any other donor (Fig. 2).  This was called “acquired donor-specific tolerance”.  Thus, the mouse experiments definitively established the association of leukocyte chimerism and tolerance.  It is noteworthy that Billingham, Brent, and Medawar had been inspired to conduct their experiments by earlier observations of “natural tolerance” in freemartin cattle whose placentas fused during their fetal development, allowing permanent mingling of their respective blood cells (Fig. 3, upper panel) and reciprocal tolerance to allografts (lower panel).

Collectively, the foregoing observations established donor leukocyte chimerism as the scientific base of bone marrow cell transplantation.  In 1962, Starzl predicted that successful organ alloengraftment would depend on the same leukocyte chimerism-associated mechanisms [ref 1].  His hypothesis eventually was upheld, but not until 30 years later. (See: Discovery of Microchimerism, A New Transplant Immunology Paradigm, Generalization of the Transplant Paradigm, and Therapeutic Implications.) [ref 2,3] 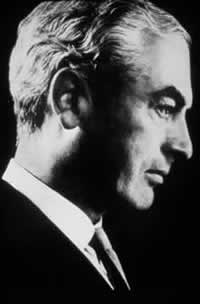 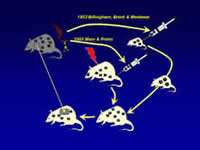 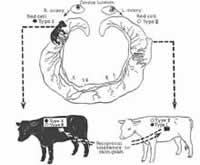 Depiction of the “natural tolerance” of freemartin cattle first suggested by Ray Owen in 1945 and formally proved by Peter Medawars team in the early 1950s.