Control of the rejection response without irradiation began with the daily oral administration of drugs that inhibit DNA synthesis:  6-mercaptopurine (6 MP) or its analogue azathioprine.  However, only one of the first 10 kidney recipients treated in London and Boston with the new drugs during 1959-62 survived for more than 6 months.  Realizing that the field of transplantation had entered a cul de sac, Dr. Starzl obtained a supply of azathioprine in early 1962 for evaluation alone or with other agents in his dog kidney and liver recipients.  Because of limited kennel space, azathioprine was stopped at 100 days in the few animals that survived this long.  Some of these kidney recipients and most of the 100-day liver recipient survivors did not reject their grafts (Figure 1). Although rare and enigmatic, these precious drug-free dogs were in part responsible for the optimism with which Starzl launched his human kidney and liver programs.

However, the most important incentive consisted of observations in the dogs that were used to formulate a human protocol.  In the patients, daily azathioprine was started 2 or 3 weeks before transplantation with the addition of prednisone (a synthetic adrenal corticosteroid) afterwards only to treat the rejections that occurred in almost all cases (Figure 2, left).  Seven of Starzl’s first 10 kidney allograft recipients survived more than one year and 3 still bear their functioning grafts a half-century later (Figure 3). The incremental use of azathioprine and prednisone exposed the 2 features of the rejection response that empowered development of the whole field of organ transplantation.  These features made up the title of his first clinical report of double drug (azathioprine-prednisone) therapy:  The reversal of rejection in human renal homografts with subsequent development of homograft tolerance (Surgery, Gynecology, & Obstetrics 117:385-395, 1963)

The first key observation was that breakthrough rejections developing under azathioprine can be regularly reversed with large doses of prednisone.  The second was that the rejection reversals frequently were succeeded by a declining need for treatment (Figure 2, left).  In his 1964 textbook, Experience in Renal Transplantation, Starzl stated that “…a state of host-graft non-reactivity is an integral accompaniment of the rejection crisis,…that partial or even apparently complete tolerance can occasionally develop as early as 4 months (page 164) and finally that ... this is perhaps the most fundamental and encouraging fact that has emerged from all previous experience with whole organ grafts.” (page 261).  In fact, 8 of the 46 familial donor grafts in his 1962-64 series functioned for the next 40 years and without any immunosuppression for most of the time in 12 of these cases.  No comparable cohort of drug-free kidney recipients was produced again anywhere in the world for the next 40 years.

In retrospect (See: Therapeutic Implications), the scarcity of subsequent tolerance examples was explained by alterations in the way antirejection treatment (immunosuppression) was given (Figure 2, right).  The first modification was omission of prolonged treatment with azathioprine before transplantation, in part because there was no time for this in recipients of cadaveric organs.  The second change was administration of large doses of prednisone as well as azathioprine from the time of transplantation.  This shift to heavy post-transplant treatment was caused by a 15-20% rate of kidney loses to non-reversible rejection when steroids were added only when indicated.  In his 1964 kidney transplantation textbook, Starzl described his experience with both the original and revised strategies.  The book was widely used for the development of new programs world-wide.

In most of the new centers, the option of prophylactic high dose prednisone from the time of transplantation was selected inspite of a sinister observation described in Chapter 18 of Experience in Renal Transplantation.  Although the prophylactic steroid therapy had resulted in better control of acute rejection in the Colorado series, it was specifically noted on Page 178 that the rate of late rejection which had been 5% in patients treated with prednisone “only as needed” rose to 30% in 19 recipients treated from the outset with prednisone.  The warning notation was generally unheeded.  In Belfast, Ireland, however, where the policy of minimum steroid intervention was scrupulously applied to azathioprine treated patients, the best pre-cyclosporine results in the world were obtained with decade or longer follow-ups (Lancet 1:983-5, 1988).  Although the Belfast observations were duly noted, the consensus movement to heavy prophylactic immunosuppression was inexorable, even after the arrival of more potent baseline drugs.

The combined use of azathioprine and prednisone remained the immunosuppression standard of organ transplantation for almost 20 years.  During this period, the only addition was Starzl’s “homemade” antilymphocyte globulin (ALG) [ref 1], purified from the serum of horses immunized against human lymphoid cells (Figure 4).  After incorporating ALG with daily azathioprine and reduced quantities of prednisone, he produced the first-ever long-surviving human liver recipients in 1967.  In 1968-69, the triple drug regimen (azathioprine, prednisone and ALG) was used for the first successful heart (Capetown) and pancreas (Minneapolis) transplantations.  When cyclosporine [ref 2], and tacrolimus [ref 3] became available, Starzl introduced the new drugs as monotherapy, adding steroids or ALG only to treat breakthrough rejections Figure 5.  However, their use alone was soon abandoned.  The reason, as with the original experience with azathioprine and prednisone, was that not all rejections could be reversed and controlled.

By the 1990’s, a bewildering array of stacked drugs, begun at the time of transplantation, was in use worldwide, with the stipulated objective of reducing the incidence of acute rejection to zero.  The better drugs made step-wise improvements possible with all kinds of transplanted organs.  However, lifelong heavy immunosuppression appeared to be the inevitable price.  The possibility of reducing this burden seemed remote until Starzl’s donor leukocyte microchimerism discoveries of 1992 unmasked the mechanisms of organ alloengraftment (See: Discovery of Microchimerism, A New Transplant Immunology Paradigm, Generalization of the Transplant Paradigm and Therapeutic Implications).

The contributions of Dr. Starzl to the medical literature of drug immunosuppression for transplantation span 50 years, with a peak in citation frequency throughout the 1990s (Figure 6).

Liver recipient 13 years after treatment for 100 days with azathioprine. 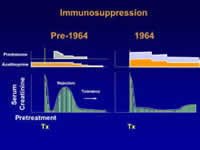 Starzl’s treatment regimens. Pre December 1963: azathioprine was given before and after transplantation, adding prednisone only when needed to treat rejections diagnosed by renal function tests (serum creatinine).

Post 1964: Treatment before transplantation was omitted and azathioprine plus prednisone were started at the time of transplantation. The potentially adverse consequences of these changes were not recognized until 30 years later (See: Therapeutic Implications). 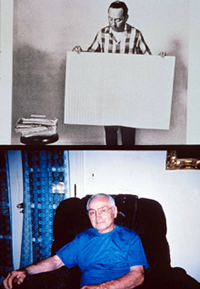 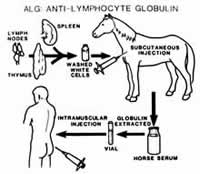 Steps in preparation and use of ALG

Annual citation frequencies of articles referenced in this Discussion. Each conceptual breakthrough resulted in a similar distribution of citations of increasingly larger scale.