When human organ transplantation began in the early 1960s, many people were walking time bombs whose fuse would be lit by their first exposure to infectious agents.  The threat seemed so imminent (Figure 1) that Dr. Starzl’s first kidney recipient in 1962 was kept under surgically hygienic conditions in the same room he was operated on until the day of his discharge.  A few weeks later, this 12 year old boy returned to public school, bearing his mother’s kidney that functioned for the next 25 years (Figure 2).  The patient, Royal Jones, and several of the other 9 members of this first-ever series of successful kidney transplantations [ref 1] demonstrated that survival and return to a relatively normal life could be accomplished, at least in some patients, by administering just enough immunosuppression to prevent rejection.

In fact, the therapeutic margin for such results may be so small, or in some cases nonexistent, that infection has been the most lethal factor up to the present day, both early and long after transplantation.  By 1963, it was recognized that most of the infections were caused by the “opportunistic” micro-organisms that invade host cells without killing them [ref 2].  These so-called noncytopathic microparasites (exemplified by tuberculosis, hepatitis, malaria, AIDS) often produce clinical disease only when host defense mechanisms are depressed [refs 2,3].  Very few drugs were available to treat such pathogens in early transplant recipients.  During the succeeding years, the pharmaceutical industry led the race to develop antimicrobial agents with which to interdict the stealthy invaders on one hand, and on the other, to develop safer drugs for immune depression.

The adaptive immune response against these intracellular pathogens and its similarity to organ transplant rejection were elucidated in the 1970s by Rolf Zinkernagel and Peter Doherty (Nobel Laureates, 1996).  In 1998, Starzl and Zinkernagel [ref 3] pointed out that the infectious “carrier states” sometimes caused by these pathogens and the alloengraftment of bone marrow and organ transplantation were all examples of variable antigen-specific tolerance (See: Generalization of the Transplant Paradigm.)  Recognition of the commonality of transplantation immunology an infection immunology (Figure 3) has led to better strategies of treatment.

The impact of Dr. Starzl on this area has been significant and long-lasting, as evidenced by the citation analysis graphs shown as Figure 4, Figure 5, and Figure 6. 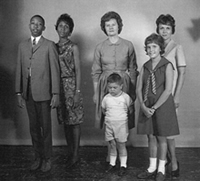 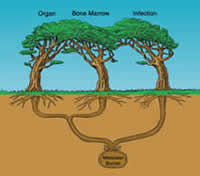 Commonality of transplantation and infection immunology

Commonality of transplantation and infection immunology

Cumulative annual citation frequency of papers relating to the Theme of Transplant-Related Infection. This 50-year collection of work showed an explosive increase in citation frequency during the 1990s and continues to be commonly cited.