The Epilogue of Dr. Starzl’s autobiography, The Puzzle People, describes the beginning of his effort in 1991 to piece together the grand design by which a donor’s organ is accepted by the recipient.  Now 65 years old, he had stopped performing surgery and had time to focus on the question.  The new effort was grounded on Starzl’s 35 years of observations in his animal experiments and in his thousands of human kidney, liver, and other kinds of organ recipients.  The initiative could be divided into four phases:  (1) the discovery of microchimerism in organ transplant recipients, (2) development from the findings of a unified paradigm of transplantation immunology, (3) the extension of his concepts beyond transplantation, and (4) and his proposal of treatment regimens for organ transplantation that reduced the need for toxic immunosuppression.

In preparation for the first step, Starzl spend the better part of a year evaluating the vast, but for the most part incomprehensible, literature on the subject of alloengraftment.  The possibility that organ recipients possessed donor leukocyte chimerism had not been suggested a single time in the preceding third of a century.  However, there had been clues of its presence in the early Colorado kidney and liver recipients, and in current studies in rodents by Dr. Starzl’s colleague, Dr. Noriko Murase (Figure 1).  After compiling the tantalizing bits of information, Starzl’s conclusion was that donor leukocytes must be present in long-surviving organ recipients.  This was confirmed in April and May 1992 by the discovery with sensitive immunocytochemical and molecular (DNA) techniques of small numbers of multilineage donor leukocytes (microchimerism) in tissues and blood samples of 30 of 30 long-surviving liver (Figure 2) or kidney recipients [ref 1, 2].  Supportive evidence was systematically obtained from animal studies. [ref 3, 4]

The microchimerism discoveries had seismic implications in transplantation immunology as well as in all other branches of immunology.  Before 1992, the immunity of organ transplantation had been viewed as a single host versus graft (HVG) response (Figure 3, Panel A). This explained organ rejection but not organ engraftment.  After the microchimerism discoveries of 1992, organ alloengraftment could be defined by interactions of donor and recipient immune cells (Panel C, central portion of field).  At about the same time, the relation of bone marrow transplantation and organ transplantation was clarified with the discovery in Seattle that bone marrow recipients who previously had been thought to have complete replacement of their immune cells (Panel B) actually had a small residual population of their own cells (Panel D).

The Discovery of Microchimerism Bibliography and Citations 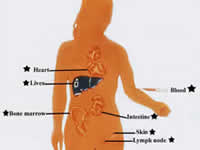 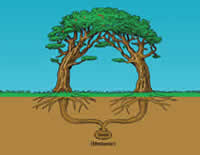 Annual citation frequencies for the publications cited in this Discussion