Starzl’s conclusions from the microchimerism discoveries made up the titles of his first 2 reports:  “Cell Migration, Chimerism, and Graft Acceptance” [ref 1] and “Cell Migration and Chimerism After Whole-Organ Transplantation”:  The basis of graft acceptance [ref 2].  The migration referred to consisted of host lymphoid organs where “…responses of coexisting donor and recipient cells, each to the other, [caused] reciprocal clonal exhaustion followed by peripheral clonal deletion”.  The sequence of the donor leukocyte-induced activation → exhaustion → deletion (Fig. 1, upright curves), coincided with the onset of rejection, its reversal, and the development of variable tolerance recognized for the first time 30 years earlier in Starzl’s bellwether kidney recipients (See: Hepatotrophic Physiology).

But what was the source of the donor cells?  Organs had been, and often still are, described as a mixture of “parenchymal” cells that have unique functions and “stromal” cells that make up the connective tissue in which nerves and blood vessels are intertwined.  In reality, up to 20% of an organ’s mass consists of white cells (“passenger leukocytes”) of bone marrow origin (Fig. 2, upper).  The key step leading to organ rejection, or alternatively engraftment, was the migration of a swarm of these leukocytes to the recipient’s lymphoid organs (Fig. 2 lower) by the same blood routes as with an intravenous infusion of bone marrow cells.  Perpetuation of the clonal exhaustion-deletion achieved at the outset was attributed by Starzl to the persistence up to 30 years later of small numbers of these self-renewing donor cells (microchimerism) (See: Generalization of the Transplant Paradigm).

Importantly, the post-transplant flood of donor cells constitutes a functioning fragment of the donor immune system whose response against the recipient (Fig. 1, inverse curves) also must be exhausted and deleted for a successful transplant outcome.  Although the host versus graft (HVG) response is the dominant one in most organ recipients, the serious or lethal graft versus host disease (GVHD) reactions that constitute the principal complications of bone marrow transplantation are not rare in recipients of leukocyte-rich organs (liver, intestine).  In Starzl’s new paradigm, therapeutic failure after either organ or bone marrow cell transplantation implied the inability to control one, the other, or both of the responses.

Thus, the microchimerism discoveries made it possible to relate organ alloengraftment to the classical tolerance models (Fig. 3) including the “natural” tolerance of freemartin cattle and to weave together the massive, and for the most part separate, literature of bone marrow and organ transplantation (See: The Leukocyte Chimerism-Tolerance Association, The First Human Bone Marrow & Kidney Transplantations, Drug Immunosuppression, The Science & Politics of Tissue Matching, and Discovery of Microchimerism).

Citation frequencies for the articles cited in this Discussion, as well as all related thematic publications in area graph and heat map formats are shown in Figure 4, Figure 5, and Figure 6, respectively. 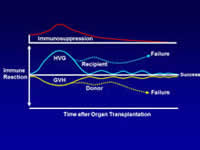 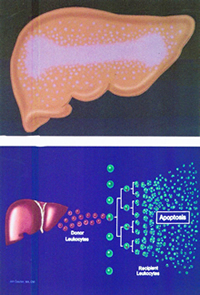 Upper: bone silhouette in liver symbolizes the “passenger leukocytes” of bone marrow origin found in all organs. Lower: passenger leukocyte migration to recipient lymphoid organs and induction there of a clonal donor-specific response 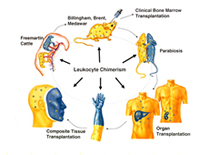