The transplantation of animal organs into humans has been a mythical theme since antiquity (Hamilton D: A History of Organ Transplantation: Ancient Legends to Modern Practice, University of Pittsburgh Press, Pittsburgh, PA 2012).  Dr. Starzl showed in the 1960s that 6 baboon kidneys [ref 1] and 3 chimpanzee livers [refs 2,3] were not immediately rejected in human recipients but were subsequently destroyed by non-specific immune effectors (especially complement activation) that could not be controlled with azathioprine-based immunosuppression.  In 1992, the same problem was encountered in 2 recipients of baboon livers under treatment with the more potent tacrolimus-based immunosuppression.  The patients survived for 26 and 70 days [ref 4].

Although the immune barrier to higher primates should be surmountable by “knocking in” human complement regulatory proteins, there was no rush to consensus about such transgenic modification of baboons, in part because of 2 ostensibly unrelated issues.  The first was the theoretical hazard of causing new human infections with the intermingling of human and baboon tissues.  The second concern was the spiritual and ethical relationship of humans to sentient primates.  Above all, the humanoid qualities and threatened extinction of the chimpanzee precluded the further use of this species.

By consensus, the pig was chosen for efforts at “humanization”.  In July 2002, cloned transgenic pigs were produced in which the principal gene that has prohibited xenotransplantation from non-primate donors was deleted.  After the knock in of complement regulatory and other genes in these unique animals, their organs have survived in baboons for several weeks or months, but never to an extent remotely approaching what can be accomplished with allografts.  Thus, it is virtually certain that more genetic modifications will be needed.  When that is accomplished, the mechanisms and rules of pig xenoengraftment undoubtedly will be the same as successful human to human transplantation.  The crucial migratory cells that are at the heart of engraftment and acquired tolerance will be those of the transgenic pig (Figure 1).

The graphic citation analysis through the year 2011 of papers published by Dr. Starzl related to xenotransplantation is presented in Figure 2, Figure 3, and Figure 4. 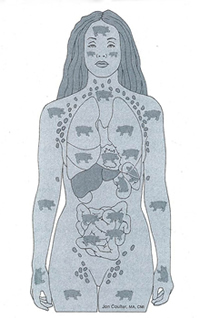 Disseminated pig leukocytes throughout the body of a human recipient of a porcine liver xenografts.