Neurophysiology was Dr. Starzl’s first area of research, undertaken after his completion of the first 2 years of medical school at Northwestern University.  Inspiration for this venture during 1949-53 came from Horace W. Magoun, Dr. Starzl’s Professor of Neuroanatomy and one of the founders of modern neuroscience (Figure 1).  During the 10 preceding years, Magoun had determined the organization and role of lower brain components in the control of motor movement.  More recently, he had turned with the distinguished Italian scientist, Giuseppe Moruzzi, to the contribution of the lower brain’s reticular formation to sleep, wakefulness, and cognition.  However, it was unknown if touch, pain, sound, vision, and other sensory stimuli reached the reticular formation, or if so, how these electrical stimuli were further transmitted to the cerebral cortex. Then 23 years old and on a summer scholarship, Starzl replaced Moruzzi as Magoun’s principal collaborator. Almost immediately, he discovered in cats what became known as the “extralemniscal sensory system”.

This discovery of this alternative pathway for transmission of sensory stimuli to the cortex changed the way in which the brain’s relation to the external environment was viewed.  To pursue the paradigm shift, Starzl cancelled his registration for the autumn 1949 medical school term.  When Magoun unexpectedly moved to UCLA in September 1949, to become Founding Chairman of the Department of Neuroanatomy-Neuroscience at the new medical school, Starzl continued the project independently in Chicago for the next year before completing his third year of medical school.  In 1951, he rejoined Magoun at the UCLA Medical School and extended his research to monkeys.  Each of the 5 published articles that made up the body of his resulting PhD [refs 1-3] generated 100-300 citations [ref 4, item 4].  A figure from the third of these articles (Figure 2) later became the logo of the UCLA Brain Institute.  The meaning of the figure was fully described by Starzl in the last paragraph of the paper’s Discussion section.  The multifaceted hypothesis advanced in this paragraph was ultimately validated, but not until the availability a half century later of functional magnetic resonance imaging (MRI).

Dr. Starzl terminated his neuroscience career in 1951 when he returned to Northwestern, completed his last year of medical school, and moved in June 1952 to the Johns Hopkins Hospital to begin surgical training.  However, Magoun’s intellectual influence was lifelong.  This was evident in a letter that Dr. Starzl wrote in 1991 in response to Louise Marshall, a historian who was compiling material for a Magoun Memoriam in the Proceedings of the National Academy of Science.  Magoun’s reciprocal respect for his student is evident in his 1951 letter to Dr. Alfred Blalock supporting Dr. Starzl’s candidacy for a surgical house officer position at Johns Hopkins Hospital.

A historiographic review based on a search of the term “reticular activating system” (and adding the original landmark 1949 article by Moruzzi and Magoun) returns 570 separate articles in this field and shows three principal papers deriving from this collection and giving rise to main branches of this area of investigation. The 1951 report by Starzl et al. (Ref. 2) remains the eighth most highly cited article in this collection and generated the main line of research until 34 years later (1985) when a study by Gonzalez-Lima et al. (Brain Res 344:70-88, 1985) of the rat RAS led to a separate series of citations that were eventually merged in 1997 with Starzl’s observations. An independent line of inquiry focusing on the role of the thalamus in sleep, first reported in 1991, constituted the third arm of RAS studies.

Starzl's brief sojourn in this area generated publications that have been cited continuously since their appearance more than 60 years ago, attesting to their lasting impact in this field. Figure 3 demonstrates citations for the articles referred to in this discussion and Figure 4 graphs annual citation frequencies for all publications listed in the Neuroscience Bibliography and Citations Appendix.

Dr. Magoun, pictured below on the left, penned a recommendation of Dr. Starzl that showed a high regard for his student Tom Starzl on the far right in the picture. Middle person: Don Lindsey 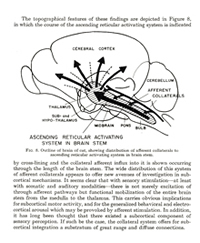 The figure and surrounding text is a photocopy of a page from one of Dr. Starzl's papers [ref 2]. The schematic became the logo for the UCLA Brain Institute as described in Starzl’s letter of September 15, 1991 to neuroscience historian Louise Marshall

Annual citation frequency of papers cited in this Discussion, 1951-2011.