Insulin-secreting islets make up a tiny fraction of the pancreas (Figure 1).  Starting in 1967, Clyde Barker, then a 32 year old fledgling surgeon at the University of Pennsylvania, showed in rodents that functioning bits of endocrine tissue (including isolated pancreatic islets) were not rejected when transplanted to privileged recipient sites to which the immune system had limited access.  Efforts to exploit Barker’s discovery by transplanting islets in human diabetic patients were unsuccessful for many years.

Human islet transplantation was accomplished for the first-ever time by Dr. Starzl’s team.  The recipients were 5 cancer patients who had undergone complete removal of the liver, pancreas, and other upper abdominal organs with replacement of only the liver.  Islets from the pancreas of the liver donor by Camillo Ricordi [ref 1] were infused into the engrafted liver’s portal vein (Figure 2).  When reported [ref 2], 5 of the 6 evaluable recipients had been insulin-free after 101-106 days.  They remained insulin-independent until their death from tumor recurrence or other causes up to 6 years later  [ref 2].

Although islet transplantation it is still considered “experimental” (circa 2012), it has been successfully used to treat many patients with Type 1 diabetes.

The abrupt impact of the work of Dr. Starzl and his team in this area is reflected in the annual citation frequency graphs illustrated in Figure 3 and Figure 4 and in the heat map representation of individual publication citations (Figure 5).

Cartoon symbolizing the use of a large vehicle (pancreas) to deliver a small package (islets).
Courtesy of Andreas Tzakis 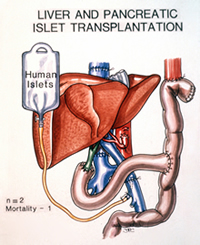 Citation frequency graph of papers cited in this Discussion.