Organ transplantation was built on 4 struts:

Dr. Starzl’s contributions to procurement-preservation began in 1958 with his development of the liver transplant models.  Although cardiac surgeons knew that the vital organs of cooled patients had improved tolerance to periods of interrupted circulation, hypothermia was not employed for transplant purposes until Starzl introduced the intravascular infusion of canine liver allografts with chilled fluids with [ref 1].  The practice subsequently was adapted (1962-63) for protection of living donor kidney grafts immediately after their removal (Figure 1).  Intravascular cooling remains the first step in the preservation of all organ grafts.

Today’s methods of cadaver organ cooling and procurement can be traced back to the model developed in dogs by Starzl with Marchioro [ref 2] and then used for the 1963 human liver transplant trials (Figure 2).  When it later became obvious that all of the vital organs were going to be transplanted, Starzl developed flexible procurement techniques with which the various organs are cooled in situ, rapidly removed in a bloodless field and dissected on a back table (Figure 3) [ref 3].  By the late-1980’s, sharing of organs from a common donor by widely separated recipient teams had become an economic and practical objective.

Extension of preservation time after cooling has been done by one of two prototype strategies.  With the option of “slush preservation” the cold-perfused organs are simply refrigerated in a picnic cooler.  The kind of infusate affects efficacy.  The single biggest improvement came with the development by Fred Belzer of the multi-constituent University of Wisconsin (UW) solution.  Studies of this solution and of many others with different ingredients were reported from Starzl’s laboratory. [ref 4]

The second generic strategy is to provide excised organs with an artificial circulation, an approach that was extensively evaluated in the 1920’s by Alexis Carrell and the aviator Charles A. Lindbergh.  With better technology in the 1970’s-80’s (Figure 4), good preservation of kidney and liver allografts for up to 2 days was possible.  Although the complexity and imperfections of equipment have prevented its wide use, continuous perfusion with refined technology probably will be necessary for true organ banking.

The principal damage in a poorly-preserved organ is caused by recipient inflammatory mediators during the first few hours after restoration of the graft’s blood supply (“ischemia reperfusion injury”).  Studies in Pittsburgh by Shunichi Takaya and Satoru Todo [ref 4] showing prevention of this injury with prostaglandins could not be efficiently exploited clinically because of the short half life (1-2 minutes) of the available drugs.  Recent experimental results with Treprostinil, a synthetic prostaglandin that has a half-life of several hours, have generated a resurgence of interest. [ref 4]

Publications related to this work show peak impacts that effectively span two generations of medical research- the first in the 1960s and the latter in the 1980-90 period (Figure 5 and Figure 6). This pattern can also be inferred from the heat map graphic of individual citation frequencies (Figure 7). Even after 50 years this work remains influential as shown by an uninterrupted succession of citations. 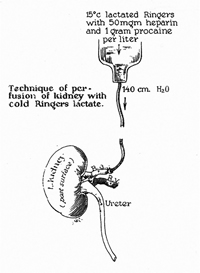 Intra-arterial infusion of cold solution into a kidney from a living donor. 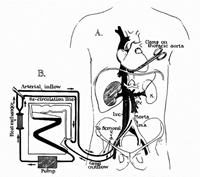 Total body cooling of a cadaver attached to a heart-lung apparatus that includes a heat exchanger (circa 1962-63). 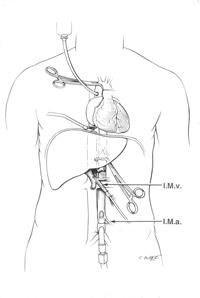 Later version of in situ cooling in which the pump oxygenator was replaced with multiple-site infusion of chilled fluid. 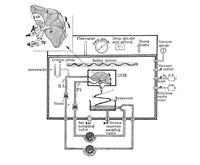 Liver preservation unit (circa 1967) in which perfusion pumps were located outside of a hyperbaric oxygen chamber (See The Liver).  The organ receptacle, the oxygenator, and the venous reservoir were inside.  The various chamber inlets permitted sampling of a perfusate, gas sterilization, and oxygen delivery and removal.  The temperature was electronically controlled.

Citation frequency graph of papers cited in this Discussion.

Cumulative annual citation frequencies of publications related to the Theme of Organ Procurement and Preservation. The bimodal pattern of citation peaks separated by several decades attests to a lifelong commitment to this area of work.